Our talented staff of professional researchers can find out if you are eligible for tribal membership and government benefits!

We know exactly which records to search to prove with certainty if you qualify for Bureau of Indian Affairs “BIA” benefits such as Minority Status, Low-Interest Business Loans & Educational Grants. Finding proof of Native American ancestry can be difficult and it requires the knowledge and skill of an expert to accomplish these steps:

Native American genealogy is unique when compared to other types of genealogical research. Most of the records available for researching Native American ancestors were created by the U.S. Government.  Those records include Indian rolls, censuses, applications and enrollment cards, annuity and allotment records. They were created when Indians filed claims against the United States–generally for treaty violations.  When courts found in favor of a tribe, benefits were awarded by the U.S. Court of Claims. but before a claim was paid, applicants had to produce documents that proved they were Native American or related to a Native American.  Applicants also had to meet quantum blood requirements (meaning they had to have the minimum percentage of Native American blood required) established by a specific tribe and/or the federal government. Once their Native American genealogy was proved, those qualifying were entitled to land allotments and/or annuities awarded by the U.S. Court of Claims.

Applying for Membership in the Cherokee Nation?

While very few American frontiersmen married a “Cherokee Princess”, thousands wed Native Americans before 1906. If you’ve heard stories about a Cherokee ancestor somewhere in your family tree and want to claim your Native American heritage by becoming a member of the tribe, you’ll have to prove it to the Bureau of Indian Affairs and the Cherokee Nation. Only after your application has been accepted will you become eligible to receive the benefits of tribal membership.

To be eligible for Tribal Membership with the Cherokee Nation, you must apply and be able to present a Certificate of Degree of Indian Blood (CDIB) issued by the Bureau of Indian Affairs. Your application for a CDIB must include acceptable legal documents that connect you to an ancestor whose name appears with a roll number and blood degree from the Final Rolls of Citizens and Freedmen of the Five Civilized Tribes-Cherokee Nation (commonly called the Dawes Commission Rolls or Final Rolls). These rolls were compiled between 1899 and 1906. Quantum of Indian blood must be computed from the nearest paternal and/or maternal direct ancestor(s) of Indian blood listed on the Final Rolls. Many descendants of Cherokee Indians cannot be certified or qualify for tribal membership in the Cherokee Nation of Oklahoma because their ancestors were not enrolled during the final enrollment. The requirements at that time were:

If your ancestors left the Tribe prior to 1906 and settled in other places, such as Tennessee, Arkansas, Kansas, Missouri, and Texas, they lost citizenship standing with the Cherokee Nation. Only enrolled members of the Cherokee Nation named on the Final Rolls and/or their direct descendants can be granted a Certificate of Degree of Indian Blood and/or Tribal Membership. CDIB’s are issued only through the natural parents. In cases of adoption, a quantum of Indian blood must be proven through the biological parents to the enrolled ancestor. A copy of the Final Decree of Adoption must accompany the application for CDIB, as well as the State Certified, full image/photocopy of the birth record. All information will remain confidential.

Lineages charges 40% less than most competitors!

If you have already ordered a project and decide to give the researcher additional time, choose the number of hours (maximum 20) at checkout.

Share your research project with family members by ordering them a copy! Price includes printing, assembling, binding, and shipping.  We can personalize their copy by putting their name on the cover page. Delivery in 5-7 days. Call 801-571-6122 to arrange rush service.

Choose this project when we need to search for your paternal and maternal ancestry to identify Native American ancestors.

What you will receive:

Most projects will be completed within three months from the time of purchase. We recommend, but do not require, that clients take a minimum of one and preferably two DNA tests. These tests play a big role in getting past roadblocks caused by record loss and undefined relationship. A research consultant will guide you in choosing a DNA testing service.

Start by telling us about your Family! 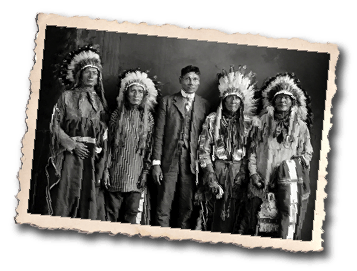 Search Our Files! Downloads are Free!